First, the excellent South Carolina poet, former President of the Poetry Society of South Carolina, and  my - I'm proud to say - friend, Susan Meyers, has won the 2012 Editor's Prize from Cider Press Review.  Her book, My Dear, Dear Stagger Grass, will be published in 2013.  Don't miss it!

Second, but not second to me: my own second book-length narrative prose poem, Longevity, will be published by Four Way Books in 2015!  This is the outcome I have wished for all along for this manuscript, which is a kind of successor to the book Four Way published in 2007, Degrees of Latitude.  While not a sequel, Longevity shares with Degrees of Latitude a sensibility, some mirror characteristics - it's all about the protagonist's relationships with women, while Degrees of Latitude is mainly about  the (different) protagonist's relationships with men - and, of course, its form, a fragmentary prose poetic narrative.

I will keep you posted as I move along towards publication.  My editor has made some challenging, and exciting, suggestions for revisions, which will take some time to absorb and execute - or reject, as the case may be - and then, at her suggestion, I will work with a line editor (how rare and fortunate is that!) to ensure that the book is as clear in its intention and as finely tuned in its music as it can be.

I feel privileged and delighted to be working with Four Way again.

Hooray for Susan and Whoosh for me!  It's been a long road to this juncture: I began work on Longevity - many drafts, several titles, and 13 years ago - in 1999.  But I well remember it took Degrees of Latitude 18 years from the first stroke of the pen to the date of publication.  And - not, as Milton says, "to compare great with little" - but I think I read in the liner notes to the CD of Paradise Lost I'm listening to in the car that it took him more than 20 years from the time he conceived the poem to the date on which it was printed in 1667.  In the event, he probably wrote it, at the rate of forty lines per day, in about five years, beginning in 1663.  Nevertheless, I'm in good company!  Excellent company all around!

Thank you, everyone, for your wonderful support! 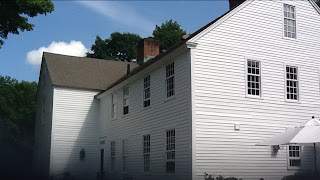 Last December I received in the mail from my second cousin, John, in Andover, Connecticut a DVD made by a local high school student, Evie Murphy, for her senior project.  She told the history of the town through the biography of Joel Foote Bingham, John's and my great great uncle.  The DVD also mentioned Joel's parents, Cyrus and Abigail Foote Bingham, our great great great grandparents, who lived and raised Joel in the family homestead in Andover, where John has now lived for fifteen years, lovingly and beautifully restoring the house and surrounding acreage.

Meantime, a pen and ink portrait of Abigail had been hanging in my living room since I inherited it from my grandmother years ago.  A plain woman, it must be admitted, but with a definite family resemblance! 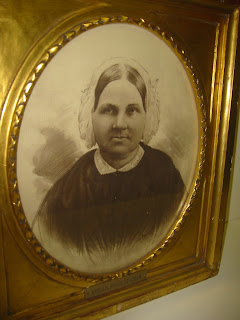 I had not been fully aware of my direct descent from Abigail or of the fact that she had lived on the farm and was buried in the town cemetery.  It was time to return Abigail to her own parlor!  With John's enthusiastic concurrence, I shipped the portrait to Andover, and a week or so later, last Sunday, my daughter and I took the train from Grand Central Station in New York City to New Haven, switched trains to Hartford, and arrived there in the late morning, to be picked up by John and driven the 15 miles or so to Andover, where branches of our families settled in the 17th century.

A long continuous history of family ownership and possession.  The property has never been out of family hands since its original settlement. 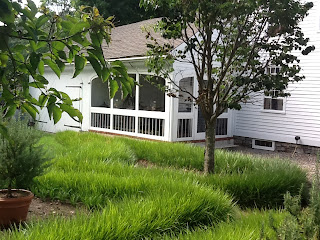 The house began as a 17th century Colonial clapboard two-over-two, with a central front door. Additions were made to the back in the 18th century, and further additions over the years have resulted, after renovations, in a charming enclosed porch where we ate a delicious lunch of fresh produce from the garden - tomato aspic more delectable than anything I have ever tasted - and corn from a local farmer, prepared by John's companion, Arlene, whom he originally hired to be his landscape designer but who shortly became his life's partner.

Across the street from the house is "our" beautiful Connecticut barn.  Originally on the same plot of land, the barn was segregated from the house when the Hebron Road was built between. 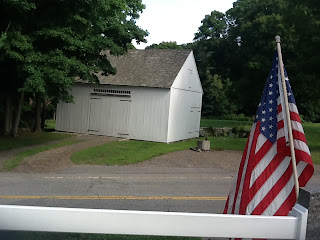 Behind the house are the wonderful fruit, vegetable and flower gardens Arlene and John have created out of a former near wilderness.  Where trees grew nearly up to the house when John arrived fifteen years ago, now tomatoes, cucumbers, sunflowers, sweet peas, and a mouth-watering and eye-dazzling array of natural pleasures abound! 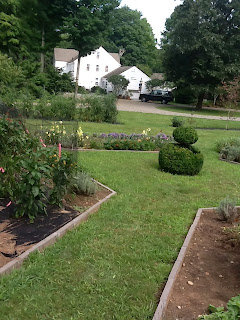 Arlene took a picture of my daughter and me by the original front door. 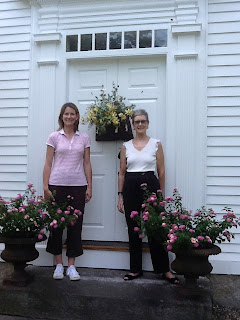 Welcome home, Abigail!  We leave you leaning against the back of a lovely desk, upon which sits a photo of your sister and of your grand-daughter, Mary Perry Payne Bingham, John's and my great grandmother!  On the mantel is your photograph, from which, possibly, your portrait was drawn, and one of your prettily embroidered dress white bonnets - unfortunately, not the one you're wearing in the portrait - enclosed in a glass case. 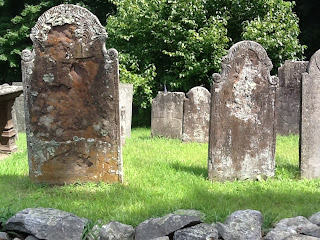 Down the road from the farmhouse is the cemetery where you and Cyrus are buried.  Close to the road, the gravestone etchings are nearly completely worn away.   So it's lucky John is there to interpret the stones.  Who will carry on when John's time is done?  Can you reach down into the next generation to touch the mind and heart of one of your great great great great grandchildren to occupy, care for, and continue the family legacy and tradition at Bingham Hill?
Posted by Laurel at 11:31 AM 1 comment:
Email ThisBlogThis!Share to TwitterShare to FacebookShare to Pinterest
Labels: Abigail Foote Bingham, Andover CT, Bingham Hill, family history, family homestead, Joel Foote Bingham, Mary Perry Payne Bingham

Close but no Cigar!

Longevity has been named a semi-finalist in the Washington Prize contest from Word Works.  Last year an earlier version of the manuscript won praise from the same contest, so it's making progress!  One of only twelve manuscripts passed on to the final judge, Longevity earns the honor of receiving detailed feedback from the contest, which may help it win this or another contest in the near future.

After winning at Wimbledon and reclaiming the Number One spot in the rankings, Roger lost his bid  for a Golden Slam by failing to win a gold medal at the Olympics against the hometown favorite, Andy Murray, at the All England Club yesterday.  It was a solid, impressive, glorious victory for Andy!  Gracious as always, Federer said not to feel sorry for him, he hadn't lost, he had WON the Silver.  Nevertheless, I was sad for him. He had worked all year with the Gold Medal as his goal.  He had that interminable semi-final match against the juiced-up, formidable del Potro on Friday - the fierce, indefatigable del Potro who went on to outmaneuver Djokovic for the Bronze!  All in all, a grand result.  Andy the first British player to win Gold since 1908!  You can't be unhappy about that!

What a great era for tennis!  Glad to be here to watch it all unfold.  On to the US Open!